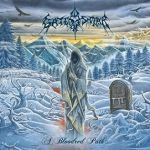 The complete catalogue of the forceful GATES OF ISHTAR got re-issued in 2017 and invites you to discover or re-discover these abiding 90s melodic Black / Death Metal masterpieces. Due to unknown reasons, the band’s debut "A Bloodred Path" was the last of three classic albums re-released (probably because Vic Records already re-released it earlier this year with its original cover artwork and without the additional 4 demo bonus tracks that have been added to this Century Media edition – Frank). GATES OF ISHTAR, formed in the early 90s in Luleå / Sweden, maintained a decent following throughout the decade, side by side with bands like NAGLFAR, THE MOANING, UNANIMATED, MIDVINTER, DISSECTION and VINTERLAND. Originally released in 1996 by Spinefarm Records "A Bloodred Path" became acquainted very fast and achieved high scores in numerous magazines all over the globe. The album stands for amazing melodic Death Metal right down to the bone and for lead’s sounding just like the prime time of IRON MAIDEN and the likes. We are talking fantastic guitar playing here from one of the bands most stable member, Oskar Karlsson. The album has been re-mastered at the Dugout Studios and Patrick Engel of Temple Of Disharmony (DISSECTION, ASPHYX, DARKTHRONE and many more) has done a special vinyl mastering. Buy this truly classic album, which belongs for sure in every melodic Death Metal collection. For more GATES OF ISHTAR info, check out www.facebook.com/gatesofishtarofficial, label contact: www.centurymedia.com