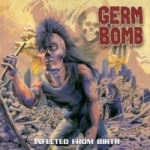 GERM BOMB’s first album, “Infected From Birth”, dashes back and forth from all-out, post-apocalyptic D-Beat crossover, to fist-pumping anthems of fury. Each song is played passionately, which is worthy of some respect even if you don’t like them. That said, however, it’s hard not to like at least half of “Infected From Birth”. Fans of emergent crossover bands such as CHILDREN OF TECHNOLOGY and traditional Heavy Metal such as ARMOUR (brilliant band) should gravitate towards GERM BOMB. As I already mentioned, the album is not stylistically consistent. GERM BOMB go slow as often as they go fast. The only flaw I can detect in the album is the juxtaposition of fast songs and slow songs, one after another. It diversifies the album, to be sure, but it does slightly interrupt the experience of listening to the album. That is not to say the slow songs are bad, though – just maybe a tad out-of-place. www.myspace.com/germbombsweden, adp.areadeath.net