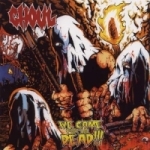 GHOUL
We Came For The Dead
(Razorback Recordings)
33:27min

And once again we have to deal with a band that tries to get into the spotlight by creating a rather “mysterious” image (Zzzzzzzz….). Nobody knows where they come from, nobody knows who they are (unless you believe that “Digestor”, “Cremator” and “Fermentor” are their real names) and they cover their faces with rather stupid looking (bloody) KKK masks (the band’s bio is even more silly). Verrrry original… and I suppose that all this will probably turn a lot more people off than into the band. Musically they are actually far better than their stupid image is, even though that doesn’t mean they are original at the end of the day. They simply rip off CARCASS during their “Heartwork” period as good as they can and deliver nine tracks in exactly that songwriting style / production. Good musicianship and almost perfect Walker / Steer vocal trade offs should make all fans of the British Grindcore legend go berzerk. The album closer is a cover of the old MEGADETH (!!) classic ‘Skull Benath The Skin’ which surprisingly turned out incredibly enjoyable in GHOUL’s version. So, instead of wasting everyone’s time with a dumb image, GHOUL should invest some more time in a more professional packaging of their releases in order to back up their obvious musical qualities. Otherwise they will certainly go nowhere, which would be a waste of talent. Label contact: www.razorbackrecords.com