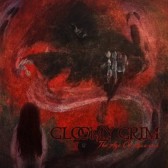 I remember the first time I listened to GLOOMY GRIMS’s 1998 debut album "Blood, Monsters, Darkness". It was a really interesting listen back in the day. Their brand of Black Metal had some kind of theatrical texture to it. In my humble opinion, a totally different take on this genre. Their second album, "Life?" didn’t grab my attention. So I moved on and lost track of them. Three more albums came by (2001, 2004 and 2008) and after an 8 year hiatus, this Finnish symphonic Black metal band returns. "The Age Of Aquarius" sees GLOOMY GRIM expanding their sound. Their previous albums (yes, I made my homework and listened to them) featured a mid to slow paced symphonic Black Metal style, full of harmonic segments and (one too many) keyboard melodies. With this new album, their music has become a lot more aggressive, without loosing its identity. Agathon’s vocals sound great here! His vocal performance reminded me of NAGLFAR’s Jens Rydén in certain parts. I also welcomed the fact that the keyboards are now part of the music, instead of being a solo instrument as in their previous material. There is also a lot of intricate and complex work in these new songs. What I like the most is that the album has a lot of atmosphere. Although there are some pretty maniacal fast parts mixed in, the songs dwell in their usual mid paced melodic style. Finally, the production. A stellar production indeed. Thick guitars full of melodic tremolo riffs courtesy of J. Heikkinen and M. Huvinen, T. Törnqvist dense bass tone (that, surprisingly, stands out in the mix) and J.Ojala’s excellent drum performance, which fits the music perfectly. A clear mix and a dynamic mastering process round up one hell of an album (pun intended). GLOOMY GRIM was one of those bands that I thought could become a lot better (and bigger) if given the right chance. And they have proven me right with this great release! Totally recommended album. Even if you are one of those "trve vnd kvlt" Black Metal fans, give GLOOMY GRIM a listen. The atmosphere alone will trap you in eternal darkness! Go head and contact the band here: www.facebook.com/pages/gloomy.grim/6870732570. And get their album from their label here: www.satanath.com