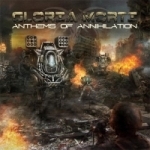 The third GLORIA MORTI release “Anthems Of Annihilation” is (unfortunately) one of the best examples of how a poor cover artwork can influence the overall impression of a release. Imagine the design of a very cheap Sci-Fi shooter from anno 2000 and than you are close to the bull’s eye. But despite this fact the band from the land of the thousand lakes has recorded an album like a musical firestorm right between Death & Black Metal. The base for such a extreme strong release is the killer sound supported by an album full of convincing hymns of annihilation. It’s maybe still difficult to justify the terminus Death Metal with supporting keys but GLORIA MORTI are in the position to show all critics the well known middle finger of Doom. The release opens with a friendly intro before the battle starts with ‘The Solution Called War’. The track starts furious, continues furious and it’s no surprise that this master plan is followed without mercy throughout the 10 tracks of “Anthems Of Annihilation”. GLORIA MORTI are using the keys as a supporting instrument and tracks like ‘Chaos Archetype’ – a perfect final track – are the best example that Death Metal and Keys can be combined. I’m really lucky that our commander in charge – thanks to Frank – arouse my interest for this release otherwise I missed one of the few black jewel of 2010 (Huh? I did??? – Frank). www.gloriamorti.com, www.myspace.com/cycloneempire, www.cyclone-empire.com