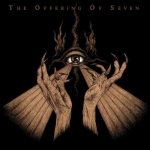 GNOSIS
The Offering Of Seven
(Terror From Hell Records)
34:25min

Quick and to the point. Judging from two full-lengths by Florida’s GNOSIS, the band doesn’t waste any time noodling around with their songs. As some bands feel the need to write lengthy songs, or offer an overabundance of tracks per album, overstaying their welcome, GNOSIS have weeded out the unnecessary and have stuck with the essentials. "The Offering Of Seven" begins with an intro of tribal drums and chanting before ‘Devils And Spirits’ kicks in with chugging guitars, mid-paced drums and bleak, growling vocals. It’s a fairly simple, straightforward track. Yet the band plays with confidence. ‘Hands Of The Fates’ is a faster blackened Death Metal track that eventually leads into an emergence of atmospheric keyboards without taking away the energy of the song. ‘Dark King Of The Mount’ is the sound of a kingdom recently conquered. ‘Golden Wings’ provides more galloping guitars and strangely familiar vocals. The band’s members remain in secret with only initials to provide a hint of their identity. ‘Transcendence Pt 1’ is a brief acoustic interlude before ‘Evil Spirit’ casually tramples over the masses. Whereas we’re all sick of bands covering DARKTHRONE or other classics, it’s nice to see a RUNNING WILD cover thrown in for good measure. ‘The Great Storm’ is another mid-tempo track that begins to excel in bursts throughout. A ringing bell, a crying baby, chanting and the sound of crackling fire closes out the album. And just like that, less than 35 minutes later, and the album is over. GNOSIS were in and out like a 15 year old losing his virginity. Here’s to hoping GNOSIS will carry on with new albums every so often. Screw the progressive shit! I’ll take solid, kick-ass albums any day. For more information, check out www.facebook.com/gnosis.fl, www.tfhrecords.com