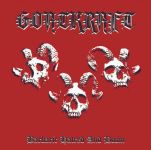 When did Norway go War Metal on us? When GOATKRAFT entered the universe I guess, the trio has been spreading terror, fear and violent noise over us, since they formed GOATKRAFT in 2017. So far we’ve had the pleasure of the great full length album “Sulphurous Northern Bestiality” released on Iron Bonehead Productions, a fierce EP also on Iron Bonehead and a bestial split album with the Canadian, fellow warmongers in GOATHAMMER. And now the time is for “Barbaric Hatred and Doom”! A tape compilation album released by Spanish Escafismo Records last year and now released on CD by Bestial Invasion Records. The album is a compilation of various unreleased tracks of utter chaos, doom and destruction. 4 original GOATKRAFT songs and a healthy handful of cover songs, displaying where the band’s sound comes from. Though if you have been listening to the band’s music, you might not be that surprised of what has been spinning during beer sessions, before penning music! GOATKRAFT is about violence and hatred, rawly distorted slowly evolving guitar riffs, punishing drum patterns and a raw and chaotic production topped with a heavy reverbed guttural bastard of a growl and low scream. If I say we are getting cover versions of among others, BLASPHEMY, BLACK WITCHERY, BESTIAL WARLUST, BEHERIT and SARCÓFAGO are you then surprised? The cover versions are a big part of this release, and do the Norwegians put their own touch on the various tracks? Yes and no, as GOATKRAFT has drawn their inspiration from the exact niche of music that the covered bands play, GOATKRAFT do already have the elements of the various bands’ sounds incorporated in their own sound. Does it work? Hell yeah, GOATKRAFT crafts some really well executed and brutally raw music with hell of a fierce intensity – and that intensity and fierceness goes straight into the cover versions! All cover versions and the 4 original tracks on this release shred and draw you in! And please do not stop with this release, do give the band’s back catalogue a healthy spin, if all bands put as much intensity into their music as GOATKRAFT, there wouldn’t be many boring and wimpy releases. The last track on the album is ‘ICBM’ by the mighty Brazilian horde GOATPENIS, as this release was set up to honor bass and vocal mutilator Sabaoth from GOATPENIS, a beast who sadly left us hanging last year, rest in chaos! Enter the hellstorm of evil vengeance: https://goatkraft.bandcamp.com, www.facebook.com/bestial-invasion-records-247631521920716