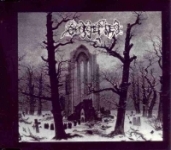 “Abysmal Grief” was already released a few times before (on tape, 7″ EP and MCD if I’m correct informed), now in 2009 Blood Harvest Records released it on 10″. So what makes GODDEFIED and this 10″EP in general that special to get honoured with another re-release? It’s clearly not the bands originality as this is a this recording almost non-existing. They sound in several moments as a rip off of ENTOMBED back at “Clandestine” – times. Still one fact is undeniable: they do this with class. In the early nineties this would be a perfect example of what to call “Sunlight-clone”! Now in 2009 these “Tomas Skogsberg-recordings” are still special and unreached in the Death Metal world and this makes this release another must-have for you as a Death Metal fan. Old underground maniacs already have wet pants because of this vinyl-release, newcomers of the old school movement will get that after listening to this recording, haha! The 6 songs here are simply in the vein all of us wanted to have ENTOMBED sound also after “Clandestine”, starting with the shredding guitars to the breaklasting drumstyle and to the typical Swedish sounding Death Metal vocals. It’s Death Metal par excellence here and a must have for all old school Death Metal fans out there. Full stop! Available at www.bloodharvest.se. Check out the band’s page at www.goddefied.com.