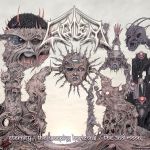 GOLEM from Berlin is one of the oldest Grind bands in Germany and a real institution in the Grind scene, not only in East Germany. In their 25th band year F.D.A. Records honours their classic work with the fine re-release of their first two full length albums. "Eternity: The Weeping Horizons" is a real jewel, but overlooked album in the Death / Grind underground history. Their first full length was already finished in ’93 in form of their demo "Recall The Day Of Incarnation", but they were not successful in finding a proper label for their music, as the Death Metal boom was already on its peak. Finally they got signed by classic underground label Invasion Records and managed to get their first record deal back in 1994 / 1995, so they were able to record their material with Dan Swanö in his renominated Unisound Studio in Sweden, where they recorded "Eternity: The Weeping Horizons" in late summer of 1995. The sound on this classic piece of Death / Grind was heavily influenced by CARCASS, especially in their "Necroticism" era. Not very unique on the first superficial view, GOLEM managed to offer high quality material on that album, even though the influences of CARCASS were obvious, but they were not simply copying their influences. GOLEM managed to put these influences together to an atmospheric sound, with technical song structures and influences of the 90s Death Metal movement and roaring vocals similar to Jeff Walker’s vocals, so finally all sounded anyhow unique. The production was fine of course as in that year I think there was no better option to get your stuff produced than at Unisound Recordings. Similar to first NECRONY, very well produced material by master Dan Swanö. I really enjoyed their first full length back then, even though I only had a shitty cassette copy and never owned the album myself. The poor lable work of Invasion Records and the late release only in 1996 together with the strange cover, the band seemed to dislike, made them only known in the underground scene but the needed impulses like advertising and extended touring etc. were missing and Invasion Records disappeared some time later from the scene, so they only earned some nice underground reviews but not the attention they should have deserved. After some line-up changes which seemed to bring some fresh air into the band’s sound, they finally released their long overdue second album "The 2nd Moon" in 1998 via ARS Metalli. Stylewise they continued with their classic sound and an album called "Heartwork" also must be mentioned, which had an impact on their sound, but also influences of technical Death Metal like ATHEIST showed up in their songs, which fitted very well into their music. Also some slight influences of old school Swedish Death Metal showed up and all together their music sounded very technical and fluent once again and both albums definitely are classics in the German Death Metal history. These two albums have now been re-released by F.D.A. Records as digital download, double CD package or in vinyl format of 100 transparent green and 400 rotten black copies with printed lyrics and old band pictures. www.golem-metal.de, www.facebook.com/alghanor, www.fda-records.com