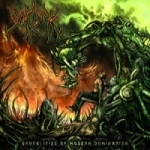 There’s nothing like the sound of a barbaric Death Metal band. GOREZONE is one such band, giving the likes of ORIGIN and SEVERED SAVIOR a run for their money. I’m always tempted to remark on how stridently opposed to this kind of Death Metal people tend to be these days, but I’m happy to report this record is squashing many of my doubts. For those of you who may remember, there was a Canadian band called PURULENCE who had more or less the early 90s equivalent of GOREZONE’s style, and they were pretty well liked judging from positive magazine reviews of the time. It’s rare that such an onslaught of high octane brutality also has in its matrix a touch of the eerie. Listen closely and the dark nuances of the songs, such as on ‘Control Us’ will become apparent. Overall this is a great record. It may be 11 years after their formation, but good things come to those who wait! www.myspace.com/gorezoneinyourface, www.xtreemmusic.com