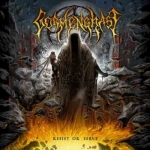 Russia has been one of the most potential Metal countries for many years already, even if many releases that are available in Russia, may never surface on any other music markets due to limited resources of some Russian labels to distribute all this stuff properly enough. Stygian Crypt Productions is one of those Russian labels that has been releasing stuff fort several years already, concentrating mainly on Folk and Viking Metal genre wise. Hence it could be said that this 5-piece Russian Death Metal act named GORMENGHAST, seems to be a little bit of an oddball on the label’s band roster. GORMENGHAST, mostly utilizing heavy, mid-paced Death Metal rhythms and tempos within their songs – with tons of nice atmospheres and true depth incorporated into the sound, have done a pretty darn good work at making a convincingly sounding debut album of theirs. The music herein is tastefully done all the way through, reminding me slightly of those moments where MORBID ANGEL made themselves known on such masterpiece works as "Blessed Are The Sick" and "Covenant". Add also bits from such names as IMMOLATION as well as DEICIDE (especially vocal wise) into "Resist Or Serve", and I think we are kinda close to the sound that these Russian Deathsters have put to work for themselves on "Resist Or Serve". It’s actually a tough job to underline the band’s weak moments on their debut as there’s really not much to be underlined in terms of bettering or improving something, if you think of how to make the wholeness to work for everyone’s true interest. GORMENGHAST have come up with a great debut record nevertheless, and hence it’s relatively easy to stay alert toward them, to see what they may be capable of creating in the future. More about these talented Russian Deathsters can be found at this location: www.facebook.com/pages/gormenghast/181214318568101, label: www.stygiancrypt.com