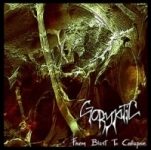 After their last album “Once Was Not” CRYPTOPSY are back again and as usually this album features a brutal mixture between Death Metal and Grindcore, executed once more in a superb way and – wait, this is not the new CRYPTOPSY release, it is the debut of the French based band GORYPTIC. But it could be the next CRYPTOPSY, I do not hear any differences. The same fast and at the same time diversified drumming, song structures far beyond the typical scheme and fine sounding Death Metal riffs. Even the vocalist sounds like Lord Worm (the former and present CRYPTOPSY singer) himself. The sound on this release is quite awesome, a high-end production which can otherwise just be heard on albums by established Death Metal acts like CANNIBAL CORPSE or similar, not necessarily on a debut album. The production is even more impressive if you have in mind that there is no big label in the background providing money, instead “From Blast To Collapse” is a self-financed release. The first release and soon amongst the top acts of brutal Death Metal, quite surprising. The only argument against this album is the circumstance that GORYPTIC are a copy of CRYPTOPSY. Well, in my eyes a very fine copy, not some lame clones. With “From Blast To Collapse” GORYPTIC have become a serious competitor when it comes to the question who is amongst the top brutal Death / Grind bands. www.goryptic.com