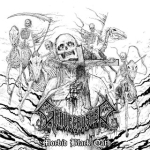 GRAVECRUSHER – a name like a promise! But will the Hungarian newbies keep this promise? After their well-received demo “Mutilation Ritual” in 2012 (also released as split-tape with NECROSODOMY’s “Eternal Darkness”), the undead horde from Szeged is back with a new release featuring four fresh chunks of meat and their already released demo stuff on one disc. Since I hadn’t heard of them before I just dug GRAVECRUSHER cause the name sounds great, honestly. And my intuition was so right… Raw human flesh, freshly ripped from the bone couldn’t be more delicious to savour. Well, I’m not here to support cannibalism, but these pictures and cliches just fit perfectly to the sound of GRAVECRUSHER. They deliver raw, primal Death Metal, not in the meaning of primitive, but of old fashioned, yet fresh. And from the slightly Hardcore influenced intro of ‘Triumph Of The Undead’ every second of “Morbid Black Oath” is a feast for Death heads. Be it the D-Beat of the variable opener, the ripping ‘Necromantic Perversion’ with its Swedish sounding leads, the riff attack ‘Morbid Black Oath’, a worthy title track by the way, or the more grooving ‘Worship The Impaler’ – every song’s a hit! No miss, for sure. And don’t forget that there are three more “oldies”, which are as great as the new songs. The demo title track ‘Mutilation Ritual’ has old GOREFEST saluting from their crypt. ‘Deranged Massacre’ and ‘Cryptic Butchery’ just sound like they’re titled. To answer my initial question: Hell fuckin’ yes, they can! So, be ready to bang your fuckin’ head and worship the impaler!!! Visit: www.facebook.com/gravecrusherofficial or www.xtreemmusic.com