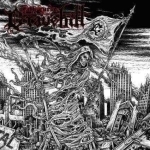 Here we go with the 3rd longplayer of Californian GRAVEHILL and of course I expected nothing more in advance than a lethal Death Metal onslaught strictly bound to the classical late 80s and early 90s genre god fathers. Well, after the first rounds I think, yeah it’s GRAVEHILL, you already recognize it because of the voice of Mike Abominator, especially if you’re familar with their older stuff, BUT (!!!) – here it comes – “Death Curse” is much more Black / Thrash and violently into the face than some parts of their older stuff. Take ‘Fear The Reaper’ – a great Black / Thrash infected hymn. The chorus reminds me a lot of NIFELHEIM’s ‘Storm Of The Reaper’, but don’t worry we still talk about GRAVEHILL here. Another kick ass scream along old school tune is ‘Crucified’; a total live song, which every sicko even reminds after eight beers. Great tune! The production is kept raw, but still powerful with close reminders to classical early 90s US productions. No plastic shit here. “Death Curse” somehow combines the finest GRAVEHILL elements with tons of reminders to old MASSACRE, early DEATH, POSSESSED mixed the Thrash essence of early SODOM, early KREATOR or very early SLAYER Bay Area style. Most of all GRAVEHILL do that, what a lot of extreme bands lack these days; they create catchy and livid songs without posing with technical bullshit. I’m not loosing respect, but I think that the quality of the album material doesn’t lack since the departure of Matt (EXHUMED). GRAVEHILL stand for themselves and if you adore real bad to the bone US underground extreme Death Metal then you should put this one straight in your collection next to NUN SLAUGHTER, SATHANAS and all those other uncrowned US icons. Deadly as fuck!!! By the way regarding their way of presentation GRAVEHILL finally droped the gore / extreme image thing a little bit; nowadays they look so much nice thrashing smarter, but the music still speaks a clear language. Comes with a cool Chris Moyen artwork. A vinyl releases is supposed to follow as well!!! www.facebook.com/gravehill, www.darkdescentrecords.com