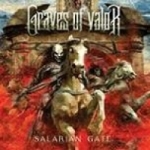 Whining bitterly over better days past never looks good, and I do try to keep my own nostalgic wails to a minimum. Yet when any Metal fan in his sane mind is accosted with this rubbish, one can’t help but lament what once was. We’re never without good bands, but there was a time when even the bad ones had only a PG rating of bad, and weren’t abominable. The new roster of bands on Relapse are, by and large, either Deathcore or Metalcore, neither of which anyone appears capable of distinguishing. However, to help foster some kind of distinction – if indeed there is any – Deathcore seems to have more in common with true extreme Metal than Metalcore. GRAVES OF VALOR, who are listed as Deathcore, use rapid-fire staccato drumming, leaden heavy production, and heavy melodies reminiscent of IN FLAMES or SOILWORK to say nothing of AT THE GATES, whom everyone hails as architects of the style. That said, what most people find objectionable are the vocals and the vocal arrangements. As I said, whining never sounds good, and music is no exception. If, on the other hand, you whine about whining in music, that is acceptable. www.myspace.com/fromgravesofvalor, www.relapse.com