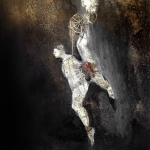 In the last months, it appeared to me that there are a lot of new or a little more established bands that are broadening the boundaries of Black Metal, leading the whole genre into new dimensions. Bands like MGŁA, DELUGE, NOTORIUS, VERHEERER or PARAMNESIA released very strong albums, thus re-opening the Black Metal genre for me. And now the Russian three-piece GREY HEAVEN FALL adds their recent album to that list of great bands and fine releases. The band from the area of Moscow has followed a long path to get there. Their early offers were two demos and a self-titled album, all sung and titled in the Russian language, sounding a little bit like ARCH ENEMY meeting IN FLAMES. Yet this stuff, released between 2007 and 2011, showed only a band with some ideas on the way to become something spectacular. In 2013, the release of a split effort with Russian country mates TWILIGHT IS MINE marked a turning point in the evolution of GREY HEAVEN FALL. They got rid of their keyboard player, their singer and the second guitar player, minimizing the line-up to a trio. During this process, they not only detected the English language but also evolved their sound to a spectacular and unique mix of (Post) Black Metal elements and Death Metal based dark stuff. And on this foundation, their monolithic new album “Black Wisdom” grew to become a monster. From the first notes, this album captivates with that mixture, adding well dosed ideas of post Hardcore and Blackgaze also. Thus, the result is a unique album that is very intense in its overall feeling and very exciting and surprising through the whole running time. The opening ‘The Lord Is Blissful In Grief’ already sets a landmark in modern Black Metal, the long ‘Spirit Of Oppression’ ultimately places GREY HEAVEN FALL on the map. This song shows all the facets of the band. In addition, it convinces with the composing skills that are necessary to create music that overpowers monotony. ‘To The Doomed Sons Of Earth’ walks a similar path, maybe a little more on the traditional side of Black Metal, before the instrumental interlude ‘Sanctuary Of Cut Tongues’ leaves a chance to catch some breath. The same goes for the intro piece of ‘Tranquility Of The Possessed’ before this song slowly builds its tension, leading to a rage with even some VOIVODesque moments. Finally the twelve minutes epic ‘That Nail In A Heart’ pulls out all the stops again, showing the many faces of the sound of GREY HEAVEN FALL. But this one is more on the atmospheric and dark side, especially in the end. And after 50 minutes of dark atmosphere, “Black Wisdom” left an impression huge enough to remember it for a long time. This album is my personal special recommendation for all who love unique stuff. In case you want to find out more about GREY HEAVEN FALL, visit www.facebook.com/greyheavenfall or www.greyheavenfall.com. And for the label, run by the band, it is www.facebook.com/aes.of.d or www.aesthetics-of-devastation.com