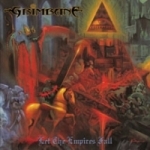 A latest signee to the Moribund roster of Black Metal horror. “Grim Canadian Black Metal heralding civilization’s end! Imagine early Judas Iscariot mixed with the melodies of Thy infernal, brutalized with a Ross-Bay (or modern Finnish) Black-Metal Inverted-Cross!” Featuring members from the pre-internet days of Black and Death Metal scenes…” vocalist/guitarist Barbarous (i.e. Ace Gestapo Necrosleezer And Vaginal Commands of the legendary BLASPHEMY; and who also was in PROCREATION, NECROSLEEZER and GODLESS NORTH), bassist Madonna Slayer (PROCREATION), guitarist Sordid (ANTI CHRIST, ODIN’S LAW) and drummer Hedon (ANTI CHRIST, ODIN’S LAW). With steely resolve and an iron fist, the four members of GRIMBANE have converged to create a massive debut of violent-yet-tuneful Black Metal. Fittingly titled “Let The Empires Fall”, the record destroys any and all preconceptions of what these four individuals “should” play or record: GRIMBANE are here to forge a new future, to wield the spear of destiny, whilst distilling the teachings of the ancient masters.” So sayeth Moribund’s advertising cult. And furthermore…”The loose ‘n’ lusty surge behind “Let The Empires Fall” is similarly straightforward. Every element is crucial, serving its noble purpose: menacingly articulate vocals command the hordes; riffs rock rhythmically yet flow with icy fluidity; bass and drums lock into blasts and marches alike, keeping a dynamic undercurrent; and even acoustic guitars make an occasional appearance, blowing fell winds of eldritch dread. GRIMBANE, basically, intrinsically understand the power of song. And every song on “Let The Empires Fall” is a veritable anthem in its own right.” No wait it gets worse… err… I mean better…”When so many Scandinavian Black Metal bands rest on fading glories – or, more accurately, “glories” well past their expiration date – GRIMBANE step forward with their own arsenal of glory, unconcerned by their own rich past but simply focused on conquering the future. “Let The Empires Fall” indeed: GRIMBANE will march over you!” Okay… That’s it…I can’t take it anymore. Enough! Enough of the slick and grease on this shoe, the leather presented here is not in question, what is however is the actual shine needed to polish up such a high-resin sheen in total effect to blind the buyer into purchasing a fake and cheap imitation of IMMORTAL. GRIMBANE is an inferior offshoot of a scene rife with the glut of byproducts from those with questionable Metal labels, more than willing enough to side step sincerity and individuality for the almighty dollar. So blatant is the case here of this fact with this album from GRIMBANE, that I am deeply insulted by the attempt made by Moribund to pass off this essentially “Made In China ” fake, as the real deal. Not to mention either the glaring transparency of GRIMBANE to Moribund, as being anything more than a plausible cash cow. A sole money making venture solidifying these exact comments made here by the Cult’s advertising department, who had zero shame in their game, in dropping the namesakes of these members of GRIMBANE and their ex-aforementioned bands, just to garner sales. Fuckin’ disgusting. Save your $12.00 dollars and buy a real CD of IMMORTAL. Contact: www.moribundcult.com