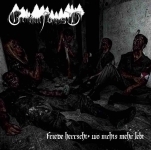 Is there any Black Metal in Austria? Yes, ABIGOR from Vienna are probably the best known Black Metal band from the tiny country in the Alps. But there are many more. For example GRIMFORST, who try to spice their vision of Black Metal with German lyrics. Which isn’t always the best idea… Active since 2003, it took GRIMFORST founder and guitar player Greif more than five years to find a complete line-up. The first album "Jagdgesang" (Hunt’s Singing) saw the light of day in 2011 after a recording process that lasted three years. Despite this long period it sounded like it was composed and recorded within three days. Terrible album! But interested listeners might check this for themselves, since it is available as a free download from GRIMFORST’s bandcamp page. Only one year later, this Black Metal five-piece is back with the follow-up "Friede Herrscht, Wo Nichts Mehr Lebt" (Peace Reigns Where Nothing Lives Anymore). And this album is a giant step forward, both in songwriting and production. The instrumental intro ‘Dämmerung’ (Dawning) surprised me, since it starts very melodic and compromising. The first song ‘Wolf’ reminded me of early EISREGEN stuff, not only due to the German lyrics and the way of singing, but also in songwriting. Listening to ‘Rom Brennt’ (Rome Burns), I asked myself, if GRIMFORST might have a problem with Rome, for there was a song entitled ‘Gegen Rom’ (Against Rome) on their debut. But anyway, the song itself shows the main way for the rest of the album: Black Metal, not of the finest kind, but pretty decent for the genre. The songs aren’t too long or epic, the sound is raw, but not underproduced and the vocal delivery is pretty typical. Sometimes GRIMFORST even go full throttle (‘Uruz’), while the songs are mostly quite variable. The only exception here is ‘Bei Mondesschein Und Sternenhelle’ (In Moonshine And Starlight), a ten minute attack of boredom and a lyrical admission of failure. Thank goodness if you don’t understand German, for these lyrics are pretty much suitable for vicarious embarrassment. Forced rhyming meets sometimes very painful lyrical total loss. Ouch! ‘Blitzkrieg’ is more or less a Punk song. Too sad that the vocals are so raw that you don’t understand a word. I really want to know the lyrics here. Trve Black Metal maniacs might check out: http://grimforst.bandcamp.com, www.grimforst.at or www.facebook.com/grimforst. Or visit the label at: www.cursedrecords.at.