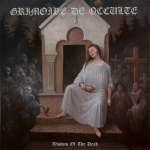 Ritualistic, sombre, monolithic… Yes! There’s just something about tremolo picked riffs that consist of a relatively few notes. Not much to hide behind, nothing left open to interpretation – either you pull it off or you don’t. Pull what off? Songwriting I guess. It’s good or it isn’t. And you have to make it interesting – bass, drums, vocals, whatever. Especially in this kind of genre, Death Metal paired with Doom or the other way around. But when it works you can’t help but to get pulled in. These kind of riffs easily stick with you. Vocal lines too, because there’s plenty of room to make them as catchy as possible. There’s no spewing of words just to fit them into a riff, but uttering that carries weight, that rings true and, well, felt. It’s also quite possible to actually make out what the lyrics are – they are chanted not only in English but in German as well, which is a breath of fresh air. It kind of breaks the flow, though, if you’re sensitive to that kind of thing. Other than that there’s not much to distract you from the steady onslaught that’s not blistering but it packs a weighty punch. "Wisdom Of The Dead" is an album that doesn’t require half a dozen listens to just make out the riffs. And even though the faster parts are few and far between Germany’s GRIMOIRE DE OCCULTE haven’t produce a snoozefest of an album, but a coherent bundle of songs that don’t feel rough around the edges. For all connoisseurs of good songwriting, bon appetit! More here: www.facebook.com/grimoiredeocculte, www.dunkelheit-produktionen.de