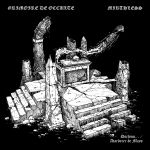 Two bands, one song per side, the tried and tested classic split seven inch formula. This limited little beast here was designed by the infamous yet overrated Mark Riddick, and the bands hail from Germany and Peru respectively. The Krauts are up first. Crashing cymbals and softly plucked strings serve as the intro of the GRIMOIRE DE OCCULTE song… and what an intro it is. Two fucking minutes of boredom. And the boredom continues for five more minutes once the real song kicks in. As much as I like monotonous and repetitive music, this shit here is like a German Autobahn: long and boring. The vocals are devoid of any passion, the riffs are just there and nothing ever happens. At all. The heaviness is down to zero, the atmosphere is non-existent and I just can’t get over the band name in pigeon French and the bad lyrics in pigeon English. A band is more than chords and vocals, and it’s just criminally lazy to not even be able to master a foreign language if you choose to sing in it – or have a band name that is just plain incorrect, for that matter. Occultism should be about wisdom and enlightenment, but GRIMOIRE DE OCCULTE are just fucking tourists from the outside looking in, a classic German move. This band is a shining example of everything that is wrong with this corner of music: instead of a serious ritualistic approach, they settle for smoke and mirrors (or candles) and robes and hocus pocus. MIRTHLESS from Peru on the flipside certainly aren’t the best band I’ve never heard, but they do things right: lyrics in Spanish, great riffs and – above all – actual songwriting! There are melodies, there’s atmosphere, catchiness and darkness. But all in all, this split seven inch is a downright forgettable mix of Death Metal and Doom, nothing that hasn’t been done before – and better. For those about to browse the internet, we salute you: www.facebook.com/grimoiredeocculte, www.facebook.com/pages/mirthless/448802688564784, www.dunkelheit-produktionen.de