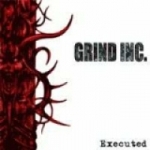 GRIND INC. from Germany originally started as a project featuring members of NIGHT IN GALES, HATEFACTOR and CORONATION in 2001. By 2003 the band was complete. What we get on their debut CD is sometimes groovy, sometimes (really) fast Death Metal executed with utmost precision and brutality. Full stop. Anybody reading my mind? Yeah, I’m not too fond of that style, right. GRIND INC. pretty much miss out any form of evilness and “ancient feeling” but of course that’s my problem because obviously they never had the intention of becoming my personal favourite band. On the other hand I have to admit that I actually enjoy “Executed” because it’s played with lots of passion and conviction. That’s what matters in the end, right? Okay, on CD it doesn’t seem to make sense that GRIND INC. have two vocalists, especially as their voices sound pretty close. But in a live situation that’s gonna be killer and it’s exactly this kind of music that was created to be put on stage. Actually, GRIND INC. got their recording deal with Morbid Records after having performed at “Morbide Festspiele Vol. 7” in 2004. So in case you happened to be around: catch these guys live – for example in Osnabrück, Germany on the last Friday in July sharing the stage with GOREROTTED and INGURGITATING OBLIVION – I’ll be there! www.grindinc666.de