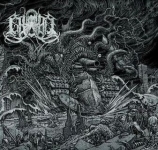 It is a fact that the Eastern European Metal scene in general and the Russian in particular is somehow like a bottomless pit. Legions of bands and projects are around, lots of them never really become known. Maybe GROND from Moscow will not share this fate. The three-piece is around for more than a decade now, released a demo in 2005 and the "Steel Coffins" EP in 2010. By 2013, they finally did their first full length "Howling From The Deep". Having never heard their previous releases, I can only judge GROND by this album. And it is definitely not a bad one. Death Metal is the game GROND play, yet they do it the American way. MALEVOLENT CREATION, MONSTROSITY and some more Thrash Metal influenced acts like DEMOLITION HAMMER come to mind easily while listening to the first two tracks ‘Astrophobos’ and ‘Innsmouth’. The mentioned bands are useful to describe the sound of GROND roughly, but they are just references, since the Russian trio blends these influences quite well. And in the following songs, they also bring in some quite nice ideas as well. The title track ‘Howling From The Deep’ surprises with riffs in ACCEPT style and ‘Azagthoth’ thrashes a whole lot in the beginning. With the terrific ‘Sea Tanks’, the band even shows some technical Death influences, while the song is mainly a groover in the vein of OBITUARY. And ‘Infected Gods’ comes along so much in early US Death Metal style, quality wise, that it would have fitted perfectly on some classic Death Metal albums. The three remaining tracks, plus one outro, aren’t bad either, yet they didn’t keep the pace of the two aforementioned highlights. As a bonus (and it’s nothing more than this), we find a cover version of OBITUARYS ‘By The Light’ that sticks very close to the original – superfluous! But aficionados of US Death Metal might check out GROND at www.facebook.com/grondrus or www.grond.bandcamp.com, or check the label: www.assault-crew.net