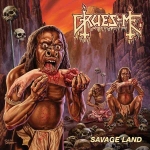 I like Metal, I like Death Metal, and when liking Death Metal it is a sure thing to be a fan of the mighty DEATH. So, of course I do also like DEATH. Even though I haven’t been listening that much to the band the latest years, so a nice chance to dust of the old albums emerged, when I had to review "Savage Land", the first album from GRUESOME. GRUESOME, a band consisting of three guys and a girl, also into DEATH. There have been quite a few ‘all star’ bands in the Metal realms the last 10 years or so, not all with a clear perspective, that can’t be said of GRUESOME. Their perspective is quite clear, homage to the one and only Chuck Schuldiner and his majestic musical endeavours. GRUESOME is lead by Matt Harvey known from EXHUMED among a good handful of other bands, handling guitars and vocals, Robin Mazen, mostly known from DERKÉTA handling the bass, Daniel Gonzalez who has been handling one of the guitars in POSSESSED since 2011 and Gus Rios behind the drum kit, best known from his stint in MALEVOLENT CREATION I guess. Though who gives a flying fuck about who is making up a band, if the music they make doesn’t make sense, or for that matter does make sense? I don’t really, even though I’ve admired the many ‘faces’ of Matt Harvey since my first encounter with EXHUMED back in the days. I had a hard time with delving into this album, after all the hype I saw about it. I received my copy for the review, more or less at the same time the pre-ordered vinyls started to hit Facebook. And the praise of of the record was and still is immense. So much fuzz for a DEATH tribute record, this old cranky geezer thought to himself. But again I had to surrender quite fast, the only thing I could think of when the album started spinning was "Leprosy", and just before I started writing this review, said album got a spin on the turntable, and "Savage Land" is a perfect continuation of it. Early DEATH with cenit in "Leprosy" and a few of the symphonic and melodic sublime touches from "Spiritual Healing". Damn, this is a well written and performed album. The blueprint for the music was already in hand, when these guys got together for writing this album, but damn, the way they have captured the essence and feel of the Death Metal scene, and the sound and feel of DEATH back then is impressive. It is like being put in a time machine and brought right back to the late 80s. The production and sound is also very close to "Leprosy" as well, as the bass drums really dominates the sound picture, backed greatly by the guitars, and the vocals, which again sounds terrifying close to Chuck’s, and the bass rumbling just below together with the snaredrum and cymbals. A strong and impressive effort that shows what DEATH might have continued to be, if not turned technical and progressive along the way, that really captures all that we love about the band and the period back then. I’m impressed and have been spinning this album really much since I got my hands on it, together with a lot of DEATH. And if you get hold of the deluxe CD version, there are two bonustracks to indulge upon, both cover versions, one of DEATH’s ‘Land Of No Return’ the opener of ’86s "Mutilation" demo and one of my alltime favorite tracks; SLAYER’s ‘Black Magic’, both done well, especially the way GRUESOME also have captured the feel and darkness of ‘Black Magic’ is also impressive, a track many have tried to make theirs, without succeeding in it. "Savage Land" is a very complete album, even though it might have been based on others work and legacy, it is still strong and can stand on its own, and should have the consistency and strength to stand the test of time. And I was hard to convince from the start, as I had taken a point of stand, though GRUESOME does their Death Metal really well, if you also have been longing after "Leprosy" part 2, which I might have! Go here to be torn to pieces: www.facebook.com/gruesomedeathmetal, www.relapse.com