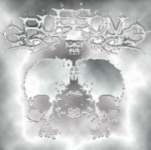 From the land of the Trolls, please welcome GRUESOME, a five piece dedicated to raw and primitive Black / Death Metal. The band members are no newcomers in any way, in fact three of them have reached the venerable age of 29 and are in activity in various Norwegian outfits since the late 80s. No wonder then that one couldn’t find traces of any modern trend on "Pure Brutality". This five tracker is a fine slab of very enjoyable basic extreme Metal, and appears as an obvious tribute to the ancient scene, done more for self pleasure than for anything else. The title track bursts out after a brief intro (a distorted and electrifying cover of the overused ‘Funeral March’ by Chopin), and is representative of the four other tracks on display. Add raw and crunchy guitars with demented vocals (sometimes bringing back in mind those you can find on the first KATAKLYSM MCD, especially on ‘Mindgrinder’), varying from Black Metal shrieks to brutal Death Metal growls, simple but competent and intense drumming, plus a very powerful sound and you finally obtain the equation symbolizing what is GRUESOME. The keyboards used here are of the Toys R’ Us type, maybe it would be a great idea to get rid of them next time, because they are unnecessary really. I don’t know what are the future plans of the GRUESOME warriors, enough said for the moment that they offer us a nice release in the form of "Pure Brutality". But on the other hand, I can’t say they are a groundbreaking and breathtaking band, so we have just to wait and see. Yet one thing is sure: they have to do something with their image, just look at the picture on the J-card or visit the band website at www.gruesomely.com and you will see what I mean. I know that image is not music but when you play hostile darkened Metal, I think you have to work on that a little! A cool release anyway, and a band worth your supporting.