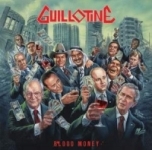 If it comes to Thrash Metal I’m like an old farmer which is rejecting everything new by preferring the originals instead of listening every week to a further retro band. GUILLOTINE is without a doubt one band which deserves the title cult act and I didn’t expect a new release after such a long time. Over a decade ago the band released their “Under The Guillotine” album which – even if it had been released by Necropolis Records and was limited from the start – is still a classic in a lot of Metal collections. Coming back to their new release “Blood Money” we are talking about a trip to the good old days – it seems that time has passed with nearly no affection to these crazy Swedish guys which are still operating in the original line-up. Twelve Thrash grenades with influences from SLAYER to KREATOR with so many aggression and heart blood that right from the start you feel that GUILLOTINE are breathing this music. Especially the sound and the guitars are the true soul of this album and the cover by Ed Repka (MEGADETH, DEATH) is nothing more than a special bonus for this release even if “Blood Money” doesn’t need such assistance. If I would search for small points of criticism I could advise some well know riffs and the disappointing title track but come on this album is definitely kicking ass and I know that songs like ‘Skeleton City’ or ‘Insane Oppression’ will kill every audience when we ever get the chance to see them on stage again. I’m ready – so see you all in the first line. www.myspace.com/guillotine2007, www.pulverised.net