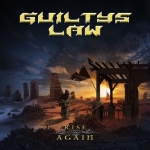 The album title could be used literally as it took this long running Power Metal outfit from Tokyo about five years to come up with the successor to "Total Insanity". Founded already back in 1994, GUILTYS LAW’s second full length continues where their debut stopped. This means that you will get a full metallic dose of Teutonic influenced melodic Power / Speed Metal with a Japanese twist. With the slight twist I mean mainly the vocal performance of Kunihiko even though he belongs to the better vocalists in that genre coming from Nippon. From the overal sound, the squad sounds quite European and from that aspect you wouldn’t assume they hail from the Far East. Anyway, the nine tracks being featured on this album deliver solid Power Metal with strong songwriting abilities and highly skilled craftsmanship. Like we are used to with bands from the land of the rising sun, GUILTYS LAW’s members are no exception and are absolutely fit on handling their instruments and thus the squad is blessed with an excellent guitar duo. The five piece comes up with a lot of variety throughout the entire album and you will get basically all ingredients a release in that genre needs: a healthy dose of speed, plenty killer leads with superb harmonies, strong riffing and epic hymns with strong choruses. All is subtle, very detailed and carefully arranged. The credits for the production goes completely to the band itself as "Rise Again" was recorded in their own studio. So all merits for a dynamic sound must be awarded to them. Just check out the speedy ‘Fight The Fight’, the great opener ‘Requiem For A Dream’ or the straight rocking ‘We Will Rise Again’. So in case you are a fan of German / European style Power Metal which was established by acts like HELLOWEEN, GAMMA RAY, BLIND GUARDIAN and similiar outfits then you should give them a try. They truely deserve it. For further details and infos just visit their website at www.guiltyslaw.com.