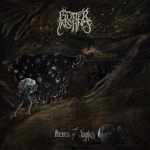 GUTTER INSTINCT from the depth of Helsingborg, Sweden (formed in 2012) comprise of members from KRAMATORIUM and ZERO TOLERANCE .They recorded a demo tape in 2013 and caught the attention of Prosthetic Records, who eventually released an EP and their debut full-length “Age Of The Fanatics” in 2016. After a few years of stillness, GUTTER INSTINCT came back with their creation ”Heirs Of Sisyphus” which this time was released in June 2018 via prestigious Pulverized Records. The album was recorded at Studio Mangelrum by Kristopher Östadius and mixed and mastered at Necromorbus Studio (WATAIN, DESULTORY, PORTRAIT, DESTROYER 666, etc) by Tore Stjerna. With the once heavily Hm-2 buzzsaw as their core sound and also taking the Swedish Death Metal passages and infusing it with nefarious channels, in “Heirs Of Sisyphus” the band has travelled further down their chosen blackened abyss, and in the new compositions they have unleashed their ugliest and nastiest creations which certainly channel darkness and damnation. No matter which era, the Swedish aspect of the band’s Death Metal sound is always fascinating, enchanting and possessive because of its inherent brutality and underlying macabre atmosphere. In this record GUTTER INSTINCT captured a deeper merging of the Black and Death styles, resulting in songs that are raw and forbidding, filled with sinister atmosphere and grave intensity. Across the songs, this combination of undeviating brutality and morbid atmosphere is felt like dripping with evilness and disdain, where songs embody a certain arcane and mysterious aura. The entire album shall be a mind bending journey for anyone into the heavier, darker and uncanny zones of extreme Metal. The album cover artwork and layout which was painstakingly designed by the enigmatic Slovakian illustrator Dávid Glomba of Teitan Arts (CULT OF FIRE, MALOKARPATAN, SHRINE Of INSANABILIS etc) fantastically embodies the inner essence this record beholds. With “Heirs Of Sisyphus”, GUTTER INSTINCT delves into the territory of abyss nothingness, where they found their roots to grow deeper and continue to evolve and spread madness in the coming future. Enchanted followers of TEITANBLOOD, REPUGNENT, GRAVE MIASMA and all connected should spend some time of their own with this record. Find out more about the band at www.facebook.com/gutterinstinct and explore the release on the Bandcamp page or visit their label at www.pulverised.net.