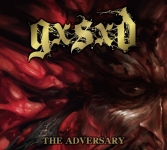 GxSxD (which stands for God Send Death) is a Japanese band active since 2002. They put out their first album "God Send Death", in 2006. It had a bunch of interesting riffs here and there, which incorporated some Hardcore elements in their style. I listened to it several times a couple years ago, but it never caught my attention. And now, 10 years after their debut album, comes "The Adversary", their sophomore album, released through Pulverised Records from Singapore. Upon first impression, GxSxD have upped their game exponentially. I really like this style of production that rely on an undeniable modern sound, but still retaining all the rawness and brutality of, say, early 90s Death Metal. The growling vocals are more on the mid range side, aided by massive guitar and bass tones and punchy drums (although I think they’re just a tad plastic for my taste). Drummer Ikunaga Mimura’s performance is an absolute tour de force, going from hyper blasts to double bass oriented mid-paced parts and everything in between. He provides a solid backbone to the insane riffing of the Oka brothers, Yohsuke and Yusuke, who also happen to trade vocal and bass duties. "The Adversary" was recorded as a power trio, after the passing away of vocalist Kazuhiro Yoshida in 2014. Since this album, they have also added Yu Sato as their permanent bass player. 3 out of the 13 songs included here are small instrumental pieces. These give the listener the opportunity to take a break from the unrelenting 33 minute attack. And yet, I found myself hitting the repeat button a couple times, since the album flows really nice and it is over too soon. This is modern Death Metal done right (it often reminds me of the Erik Rutan era of MORBID ANGEL, BEHEMOTH or bands like that – Frank) . Although "The Adversary" is not a groundbreaking album, GxSxD has done it the way it was meant to be: unrelenting, precise and utterly heavy! Contact the band via www.facebook.com/gxsxd and get their album from their label here: www.pulverised.net