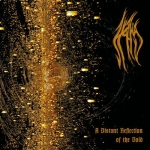 HALLIG
A Distant Reflection Of The Void
(Talheim Records)
62:45min

HALLIG are hailing from Germany and have just released their second output entitled "A Distant Reflection Of The Void". The opening track ‘A Dawn Beneath Titanium Clouds’ starts with some keyboard notes and could be an intro of a Gothic band before the guys start to unleash their Black Metal inferno. Somewhere between ISTAPP and UADA the band found their own cold sound. Enriched by some folky sounding Heavy Metal guitars the band really managed to develop their sound and wrote some really matured and fine melodic Black Metal songs. Especially the vocals of the two involved vocalists cover all parts of this genre between screams, grunts, caws and also folky clear vocals. ‘Neues Land’ is the first track with German vocals and another good and fast melodic Black Metal song again with good melodic guitar tunes. ‘Truemmer’ could also be a track of ISTAPP and delivers freezing and grim Black Metal. It has some really nice bass-guitar tunes which I really adore in songs. ‘Straight To The Ninth’ starts with some rain and thunder as bridge into the song and with its slow tunes and clear vocals the track goes again into the Folk direction before it gets painted black in the second part but also melodic with a really melancholic touch. To pick a single track from this album is difficult as all are above average and definitely have been worked out very carefully with a high love for details. The production is very clear and powerful and the album was granted a very well-fitting cover. What really makes this output very enjoyable are the fine lead guitar tunes which have this certain depressed melancholic touch, somewhere between Suicidal Black Metal like older FORGOTTEN TOMB or even old KATATONIA but of course incorporated into freezing Black Metal. A really strong album from a strong band and really worth to check for all Black Metal lunatics. For more info, open the gates via the following paths: www.facebook.com/hallighorde, www.talheim-records.at