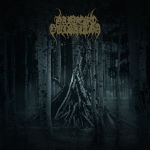 HARVEST OF GULGALTHA from Phoenix, Arizona are active since a decade now and have just released their second album “Ancient Woods” via Godz Ov War Productions. The style is somewhere between Death, Doom and Black Metal with a very thick and atmospheric sound. The vocals vary between grunts in the vein of Martin van Drunen and haunted screams, similar to what It has offered in the 90s. But this is also my first point as the screams are pretty annoying after a while. The guitars and drums are fine and create a damn menacing atmosphere with oppressive riffs. But the problem is that every song sounds pretty similar to the previous one. Sure, the work is solid and fans of Doom / Death or Funeral Doom or even old school Death Metal get offered seven tracks that fit perfectly into the winter time but I miss some solos or any other trademarks which make the difference. ‘From The Depths Of Acosmic Light’ as opener is not bad, also ‘Talisman Fed Flames’ and ‘Ancient Woods Poisoned Black’ offer cool drumming and solid tunes but definitely there is some space for variation. What hardly anybody can match is the thickness of the guitars, which crawl out of the speakers and the whole sound has a damn good production even though it lacks a bit of variety in sound. If they would work on this, the band definitely could get more attention and a wider range. Rounded off by a good cover artwork, the album still should be checked by those who are into Doom or Funeral Doom or thick old school Death Metal. More info can be found here: www.facebook.com/harvestgulgaltha, www.facebook.com/godzovwar