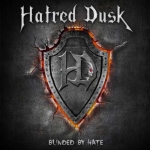 HATRED DUSK is a French horde from Paris, which was active in the early 90s. They released three demos back then before they took their first long break from 1996 to 2008 and then another short one in 2014. But finally vocalist Phil has put together a new line-up and returns with the first ever released EP in form of "Blinded By Hate". The EP starts with the intro ‘Welcome To…’ a typical 90s intro with strings and a lead guitar melody and a dark whispered voice which leads into the first real track ‘Blinded By Hate’ which is a very enjoyable mixture of classic Heavy Metal and old school Thrash Metal in the vein of old METALLICA mixed with a thrashy fundament in the vein of EXODUS or even SLAYER but less brutal. The material is very groovy with a good level of brutality crossing the borders between Heavy and Thrash Metal without sounding wimpy or boring. Especially the vocals which get supported by Hardcore-esque choruses are pretty tough and well fitting. The guitars and the also well-fitting drumming really make the head bang again and the track is a good starter into the day in the car. Especially the solo part is really kicking some ass. The second track ‘Darkness’ comes up pretty groovy again but a bit more brutal with really good lead guitar tunes and pretty good drumming again. The vocals are brutal but good to understand and all mixed together really make the head go up and down again. Also the silent parts with the strings are bringing some variety into their music and again their lead guitarist shows his cool skills. I hope the band will continue now and write a full-length as this taster is very promising and a good alternative to all the Death Metal stuff I normally listen to. Thumbs up to Paris and if you are curious now, check the guys via the following sources: www.facebook.com/hatreddusk, http://hatreddusk.bandcamp.com