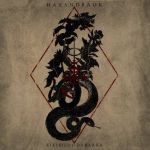 “Ki Si Kil Ud Da Kar Ra” is the debut album of HAXANDRAOK, an international band formed by the guitarist of the Greek Black Metal act ACHERONTAS, Saevus Helcath, and the Polish drummer Marcello Szumosvski. Here we have almost 30 minutes for five songs of pretty melodic Black Metal. We can describe this Greek – Polish duo as a mixture of various Black Metal styles and sounds. For example, we can hear the occult and morbid atmospheres of Hellenic names such as SEPTIC FLESH, NECROMANTIA and ROTTING CHRIST, the brutality of Polish blackened Death Metal bands like BEHEMOTH and HATE or the melodic musicianship of EMPEROR’s “Anthems To The Welkin At Dusk”. HAXANDRAOK’s formula is a costant and solid assault of dark and melodic atmospheres with some hellish tremolo pickings alternated to some catchy mid-tempo riffs. The songwriting is as excellent as the drumming, which is pretty reminiscent of BEHEMOTH and INFERNAL WAR in the blasting parts. The vocals aren’t particularly sick, but they work pretty well in creating a mystic and ritualistic aura. The lyrics deal with occult and witchery in the purest Greek tradition. In conclusion, if you’re into technical and melodic Black Metal, this is for sure an interesting addition to your collection. This is a very well played album that has its main focal point in the atmosphere. If you’re looking for raw and brutal Black Metal, stay away from it, although the drumming has its appeal and is, in its own way, pretty violent and savage. www.facebook.com/haxandraok, www.van-records.de