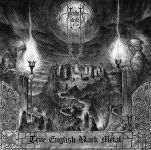 English Black Metallers HEATHEN DEITY have issued out their first full length album. Comprised of members / ex – members of some of Black Metal’s more notorious acts such as HECATE ENTHRONED, RAVNKALD, THY DYING LIGHT and GOATVOMIT666 the quartet has finally cracked out an album after 23 years of EPs and demos (hey better late than never, right?). Let’s dive into these 12 tracks that clock in at just over 75 minutes and see if this debut album holds up well. The intro track could have been shortened to about 20 seconds as the whole audio track of people screaming and hearing flames drags on for longer than expected. ‘Burn In Satan’s Name’ is up next and right off the bat you get that good mid-late 90s era Black Metal melodic guitars. The production on this sounds solid, you can clearly distinguish the instruments. The drums are crisp and thundering, the guitars really sound clean, the bass guitar could have done with a bit more low end but overall not bad. Vocalist Dagon did a stint with HECATE ENTHRONED back in the early 2000s and his vocals sound great so far. This track has me really tapping my feet and follows the antiquated recipe of English Black Metal. The album continues with some solid tracks that stand out like ‘True English Black Metal’, ‘For The Glory Of Satan’, ‘The Black Goat Of Infernal’, ‘For The Nameless One – Shemhamforash’ and ‘The Lord Of The Knell’. Very polished and solid songwriting to help carry the flames of Satan. The acoustic song ‘Beneath The Fires Of Albion’ provides a nice departure from the chaotic thrashing of earlier songs. The album wraps things up with ‘The Shards Of Winter’ and is a nice way to end the album as the song starts with a solo guitar providing atmosphere and whispered vocals but quickly ramps up to 1000 mph crushing drums. A really solid debut album with great sound / production and tracks that keep the ear hooked. The 90s era Black Metal vibe is prominent and gives off a nostalgic homagel for those fans of old CRADLE OF FILTH / HECATE ENTHRONED and with some hints of old GEHENNA (yes I know GEHENNA is not from England but their musical style mirrors that of the English Black Metal scene). The title of the album was a bit generic, especially for a debut album, other than that the music was solid. Definitely a band worth a checking out. More information at: www.facebook.com/heathendeityofficial, www.facebook.com/cultneverdies