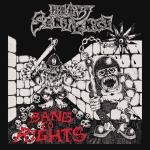 Maybe there is something that feels too contrived when a band releases in 2021 an album with a cover artwork into which such a lot of effort must have gone with the aim of so much resembling the DIY illustrations of small-scale underground releases from the 20th century. The ridiculous illustration is complemented by a logo that seems like a poorly made doodle in some high school notebook. This gimmick may be a tongue in cheek homage to those early days, but regardless, this is in fact some of the best Punk – tinged Heavy Metal I’ve listened to in the past few years. Like the artwork, the music belongs to those pristine times of the NWOBHM when there was an obstreperous youthful rage being expressed in decibels. I hit play and I began by thinking that these vocals, seemingly ruined by alcohol and tobacco, fit the band’s sound like a glove, but I soon noticed that the vocalist can actually sing quite well and powerfully (listen to the marvellous ‘Cold Reins’). With music sounding so deliberately raw and with an old school vibe akin to bands like MOTÖRHEAD or TANK, this seems to me, in a way, to be a kind of tribute band, in this case to a particular time in Metal history. This circumstance doesn’t subtract in the least from their quality, mainly when they achieve their goal with such flagrant competence. All members are clearly talented, but still the guitars are a definite highlight, with a lot of a Hard Rock feel and plenty of effective leads throughout the album with great catchy moments in songs such as ‘Edge Of The Knife’. A remarkable debut that is sure to have impact! For more HEAVY SENTENCE information please visit www.facebook.com/heavysentence, www.facebook.com/dyingvictimsproductions