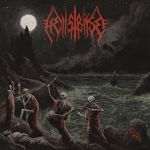 Damn, I thought Chaos Records had folded. They released a hell of a lot of cool releases some 10 – 15 years ago? Or was it more? I’m getting old here and the past is becoming very relative and what I thought was last year’s best release, is suddenly ten years old. Though it seems the Mexican label still lurks out there, putting out an interesting release here and there. Here we have the first sounds from the new American entity HELL STRIKE, the band might be new, though the members of the band are veterans within the American and Mexican Death Metal scene. First of drummer Charlie Koryn, one of my favorite drummers, who plays in a good deal of bands, though some of the ones I dig are VOIDCEREMONY, ASCENDED DEAD, FUNEBRARUM and I think he is playing live with the mighty INCANTATION as well. The guitars are being handled by the two Mexicans Jonathan Quintana and José Luis Rodriguez, who both have been playing / are playing in Mexico’s best kept secret BLOODSOAKED and various other bands, especially Quintana has been playing in a good deal of bands with Koryn. The line-up is rounded off by bassist and vocalist Jon Reider who we also know from ASCENDED DEAD. Quite a seasoned line-up within the world of grim and chaotic brutal Death Metal. So, do we get slabbed around by Death Metal here? Indeed, we do! A good mash of old school brutal heaviness, meshed with more a modern relentless chaotic swarm of brutality, a mix that always has worked well. It is easy to hear where these guys are coming from, though they still manage to create a new sound that isn’t totally aligned with their other or prior bands. The guitars are churning out some great riffing, both speedy buzzsaw-like chaos, though also some great hooking riffs that makes you headbang like crazy. The bass is heavy and noisy, a good fit for this madness and the vocals relentless and spot on, grim and almost frostbitten with healthy dose of reverb. The drumming is stellar, a good mix of technical progression and a steam engine blazing away down the rails. They guys are creating some intense dark drawing atmospheres intertwined in all the dark brutality. I really like how they have crafted the songs. The production is warm and brutally fitting, Koryn oversaw and engineered the recording of the album in Portland, then it was sent to Chile to the magic man of brutal and heavy assaults Pablo Clares, who also among a lot of great productions, has mixed FORCE OF DARKNESS from the very beginning until new the spanking new album “Twilight Of Dark Illumination”, an album I reviewed for these very pages last week. He has done a good job with the mix, organic and powerful and with a fine amount of space for each incantation from the band. The mastering took place in a former church in Sweden, by the hands of Tore Stjerna, and well, he seems to get the job done, each and every time. A powerful, heavy, organic and fitting production for this EP. There is a lot of Death Metal being released these years, and surprisingly much of it is quite good. HELL STRIKE is joining all these good bands, that hit the nerve of Death Metal with a lot of intensity and fieriness. This is a heavy old school strike of Death with a good deal of mysticism put into it. If the band keeps it up this way, they’ll make some killer releases in the future, I hardly can wait. Enter a portal to nowhere: www.facebook.com/hell-strike-109014867658956, www.facebook.com/chaosrecords