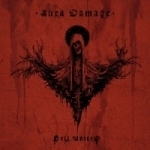 The Polish can do it better. I mean, when it comes to some certain extremes in Metal music how to make your head explode by the power of intense sonic assaults, for some strange reason the Polish Metal musicians seem to be incredibly professional at – and HELL UNITED belongs to this category, without a slightest doubt at all. All four guys have also been members of the Polish extreme Death Metal act called ECLYPSE, which recorded just one excellent album in 2004, titled "Applause: JHVH Elohim Met", for the Polish extreme Black / Death Metal label Redrum 666. After the name change to HELL UNITED, the band has done one demo, a couple of EPs and 2 full-length studio albums, off which the band’s latest 9-song recording has been baptized by the title, "Aura Damage". If you have just ever heard of ECLYPSE’s "Applause…" album, then you should already pretty much know what to expect from this release, too. Musically HELL UNITED’s 2nd album ain’t that far removed from the same vicious blackened Death Metal approach that ECLYPSE’s "Applause…" was fully loaded with. HELL UNITED sounds violent and demonic the same way as ECLYPSE did – with a fair amount more diversity and complexity added into their sound though. To give a better musical description about "Aura Damage", of course it would be the best thing if you grabbed a copy of this and listened to the album yourself but imagine combining some of IMMOLATION’s unorthodox riffage together with something that made MORBID ANGEL’s "Abominations Of Desolation" such a splendidly wicked release back in the day – without Trey’s endless streams of hotly burning solo feasts though. HELL UNITED sounds hot – and it slaughters. This is maximum blackened Death Metal brutality and intensity, carried out with such a strong conviction that undoubtedly is meant to send you hell and back. Burn poor fucker, just burn…!!! More about HELL UNITED, at: www.hellunited.com, label: www.hellthrasher.com