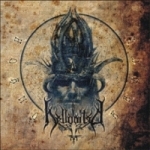 One more release which shows how huge the influence of BEHEMOTH was (and still is) on the Polish Metal movement during the last years. HELL UNITED are another band which takes many details from BEHEMOTH’s work of the last couple of albums. For sure it is obvious that they can’t match with the uniqueness of BEHEMOTH’s mighty development over the last years. As this is HELL UNITED’s first full-length release we probably shouldn’t expect too much and BEHEMOTH didn’t convince me that much either with their first releases. Musically this is quality stuff and for me totally strange to see again how huge the talent in the Polish scene is. The technical quality is over the top and the first 6 songs on “Hornokracy” are impressive in music and sound. Those 6 songs were recorded in January 2008. The last 3 songs (plus intro) added here are the songs from their demo “Extra Strength Of The Obscure” from 2006 and seriously I don’t understand the reason for including them here. The songs might be pretty good (which they are) but it still feels kinda strange to have 2 different recordings from one band on the first release. From my point of view it would have been the far better decision to record those songs new again and include them in this version on this release. Anyway, HELL UNITED is a good band in the Polish blackish Death Metal vein which deserves your support if this is your brand of Death Metal. Available at www.lilithprod.com.