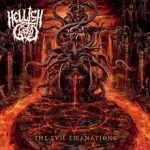 Formed back in 2015 this is the debut album of Italian Death Metallers HELLISH GOD. If you ever miss a good old DEICIDE album, then this is sure to fill up that space. Hellish, brutal and with a slightly technical edge, these maniacs have created a very good album in just barely half an hour. To be honest, that is the right time for this kind of music, although HELLISH GOD are clever enough to have quite a bit of variation between songs, but they keep them short, direct and to the point. Some touches of INCANTATION and even to old GRAVE can be found in here too, giving them more sound than just that of the Floridian legends. Lyric wise we are faced with occult themes, anti religious chants and the triumph of fire over light, which is of course something good to hear about. Also, many bands of similar style seem to abuse from overproduced sounds and here HELLISH GOD keeps it a bit more natural. There are tons of riffs and while we cannot talk about originality here (and we do not really need to have originality, just bestiality!) it is done in a top level form. If you like the last albums of BEHEMOTH, KRISIUN and DEICIDE you will more than like this album. Given the fact some of its members already have experience in former bands in the Italian movement, it is no surprise they have released such a good album. When it comes to brutal Death Metal, there are certain things that separate the bands that just try to be brutal for the sake of it and those that are able to reach a musical brutality. HELLISH GOD has reached that musical brutality, they have added occultism touches to it and released an album that will surely be a delight for those worshippers of the dark one. It is the kind of band that has a killer future ahead with an already killer present. www.facebook.com/hellishgod666, www.everlastingspew.com