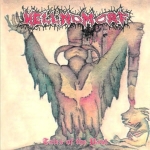 HELLNOMORF
Tales Of The Past / Limbus
(American Line Productions)
50:47min

This CD gives rise to a particular question: do really all obscure demos from the old times need to be re-released? HELLNOMORF from Mexico were around through the 1990s, released two demos and are rumored to have recorded a full length album. But they never became known. Listening to the album here, that features both of their demos, I understand why. The three songs from "Tales Of The Past" from 1992 are pretty unspectacular Death Metal, very rough, typical for that era and not really exciting. Might be interesting for those who like their Metal of Death raw and bloody. But the eight songs from the second demo "Limbus", released in 1995, are really irrelevant. HELLNOMORF wanted to be a little more like ATHEIST here, but failed. Breaks and influences from other styles sound so put on that it is hard to bear. The best moments of “Limbus” are the straighter ones, but even they suffer from a muddy production that kills every joy of listening. Honestly, if no one re-released these demos, the world wouldn’t have missed anything… More information at: www.myspace.com/hellnomorf, www.facebook.com/pages/american-line-prods/132289543506339