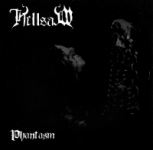 The latest update out of the HELLSAW camp is a new contract with Napalm Records and the recording session of their third album “Cold”. So what can we expect from an Austrian Black Metal band under the wings of the once so blackened major label. For sure not another napalmed edition of ENTHRONED – the presented songs can be roughly summarized under the terminus mid-tempo Black Metal but with an extreme dose of depression and melancholy. “Phantasm” had been released in 2007 and it’s the true understanding of the term ‘keep the underground alive’ that Folter Records are still supporting the band even after they left their label. The melancholy is perfectly woven into the 9 songs mainly by giving the music some points of rest or reducing the overall aggression of the songs and maybe that’s one reason why the album needs quite some time to fully catch the ear of the listener. But after several trips into the phantasm world I must admit that everybody who is interested in good and solid played Black Metal with a certain piece of individuality will find in this Austrian horde a further interesting band. If HELLSAW are in the position to intensify the shades between their Black (Black Metal parts) and White (silence & depression) cosmos they will further impress the world wide extreme Metal scene – “Phantasm” is for sure a good point of reference. www.folter666.de, www.hellsaw.com