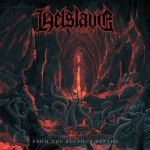 Italy’s HELSLAVE’s new album “From The Sulphur Depths” is a calculated and raw Death Metal record presented by Pulverised Records. This is the band’s second full length after a period of 6 long years. Luckily the gap did not deter the band, they’re in top gear from the get go, ‘Unholy Graves’ introduces us to the brazen attack. The drumming is particularly reminiscent of the Swedish scene. The riffs are sharp and delivered consistently throughout the record. This is a good throwback to the old school Death Metal scene with a modern twist on delivery. The vocals and the drumming are my favourite parts of the album. Absolutely deep, like unearthing artifacts from a bygone era, the vocals are on point on every single song. The buzzing guitars do their part and the riffs are fine. However, I did wish I heard more variety and no, there isn’t anything wrong whatsoever but given how well the band rounded their entire sound. I was hoping to listen to a broader variety in terms of writing because they clearly know how to deliver it without error. I suppose if I were to address this or conclude this note with a single statement it would be, “Mixed and mastered by Dan Swanö at Unisound Studios”. The album sounds great, it’s neither too polished nor too raw, it touches the sweet spot for listeners across all mediums. Amply experienced on tracks like ‘Last Nail In The Coffin’ where you’re instantly transported to an ENTOMBED like atmosphere. I have to give it to these Italian devils, the delivery is fantastic! At just 37 minutes long, HELSLAVE tick off all boxes on this record. Definitely recommended for the fans of (Swedish) Death Metal in all shapes and forms. For more information, please visit www.facebook.com/helslave and www.facebook.com/pulverisedrecords