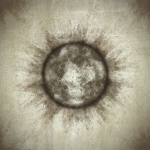 Greece, once known for philosophy, democracy and of course mathematics (the theorems of Pythagoras and Tales, do you remember?). Nowadays better known for insolvency and fraudulent bankruptcy and it is quite amazing that such a lilliputian (regarding the economic strength) country is able to lead whole Europe to a political and economical downfall. Thinking about extreme Metal from Greece two bands always came up to my mind – ROTTING CHRIST and NECROMANTIA. Compared to those bands HERETIC CULT REDEEMER are quite a newcomer, formed in 2009 and this release is their first output, the self-titled debut. To describe the music is not that easy, because to my ears three different styles can be identified. During the fast ones, like the opener ‘Crawling Hope’ and the follow-up ‘Bleeding Of The Giant Sun’ the source of inspiration is evident – MAYHEM all through the “De Mysteriis Dom Sathanas” – era. The songs ‘The Oldest Of Times’, ‘Concatenation’ and ‘Destiny Of Death’ tend more to the mid-tempo Death Metal a band like BEHEMOTH cultivated during their latest releases. And the last two songs ‘Unknown Salvation’ and ‘7’ are very slow played, repeating and repeating guitar riffs until a certain kind of hypnotic atmosphere, which is destroyed by fast drumming attacks and the atmosphere is built up again, some chantings in the back, acoustic guitars and tribal drums. Well done, because it does not sound that boring. The only disadvantage is the heterogeneous kind the different styles are mixed. Or, to be more specific, not mixed. Two Black Metal songs, then three Death Metal songs followed by two (more or less) obscure kind of slow Doom Black Death. But in general this album is not worse for a debut, I really enjoyed this output. From my point of view for the next release HERETIC CULT REEDEMER should concentrate on the style performed during the last songs, because they are the more dark and interesting ones. www.facebook.com/pages/heretic-cult-redeemer/108482089276374, www.hellthrasher.com