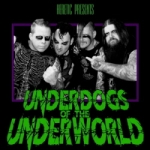 It’s hard to believe that 3 years have already passed since the release of HERETIC’s previous album "Angelcunts And Devilcocks", but this band has surely done a lot to spread its name further during this period. They got signed to Ván Records, toured a lot, made some endorsement deals and brewed this new album – "Underdogs Of The Underworld". Those who are not familiar with this band (not to be confused with countless other bands named HERETIC!) – during the last 2 decades or so, Thomas Goat (vocals, guitar) and whoever accompanied him during various periods, have explored the meaning of the words “raw”, “dirty”, “sleazy” and “Satanic” in nearly any way possible. From super minimalistic (only vocals, drums and super primitively played distorted bass) Black Metal that makes HELLHAMMER’s demos sound overproduced, to very catchy Heavy Metal hymns, always performed with a lot of filthy attitude and full of memorable riffs. "Underdogs Of The Underworld" is the band’s most Punk – inspired album yet, but the mixture of influences is still quite wide. Some of the songs could fit under the MIDNIGHT moniker, but in other parts of the album – everything from VENOM to MISFITS to MENTORS is well blended together, with a lot of attitude and no shortage of bottom end. It couldn’t be different, considering the fact that HERETIC has one guitar player and 2 bass players in the line-up. The omnipresent bass touch and Thomas’ ability to sing well in many different styles – surely help to distinguish this particular band from numerous others, who have similar influences. Overall – this is a damn fun album, full of catchy and rather sleazy tracks (this album has the least amount of “Satanic” lyrics in HERETIC’s discography so far) and a good production. The sound here is quite organic (even when it comes to drums, which is so rare nowadays) and the songs flow rather well. Those who enjoyed the band’s previous album will not be disappointed and those who like primitive Metal and Punk music (and don’t mind obscene lyrical topics à la THE MENTORS) – will not be disappointed by what these Black Metal Punks have to offer. www.hereticmaniacs.com, www.facebook.com/hereticmaniacs, www.van-records.de