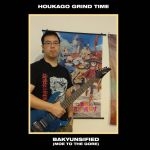 HOUKAGO GRIND TIME is a one man Goregrind project by Andrew Lee. The version being reviewed here is a CD pressing from Selfmadegod Records. Andrew Lee, yes, is the same person behind RIPPED TO SHREDS and a handful of other projects. Clearly he’s had a lot of time this year and has been putting out some fantastic music. HOUKAGO GRIND TIME is a mash up of Grind and Anime and I’ve got to admit this is good fun! The riffs are unforgiving, the solos are actually fantastic! They’re possibly the highlight of this entire album. Does one release give us a neutral look into the capability of the artist? Yes! HOUKAGO GRIND TIME clearly rubs shoulders with some of the quality Goregrind and manages just to differentiate itself as well. Anime themed Metal isn’t new per se but this feels just right. ‘Effortless Regurgitation Of Kyoani Moeblobs’ is a prime example, an absolutely crushing track that just destructs everything in its path. It’s just a minute long but the insane solo that it begins with leading to a lightning quick array of riffs and dungeon vocals to live up to the madness. ‘Ruptured In Akkariin’ on the other hand sticks to the template of riffs and just plays along, the entire album is a shift between chaos and normalcy if such a thing exists in Goregrind. The best title goes to track # 7 ‘A Manual Of Ways To Occupy Oneself While Waiting In Line For Limited Edition Merch’, it certainly is helpful! There are occasional surprises in the album as well, track # 6 ‘Hey Toshino Kyoko’ has a melodic solo in between that somehow fits into the sonic carnage, it sounds like a tribute to early ENTOMBED. This could very well be HM2 Anime Goregrind. On the whole this is a fun release. Recommended. For more information visit: www.facebook.com/houkagogrindtime, www.selfmadegod.com