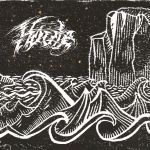 The band name translates as swell or rough sea and little surprising this release starts with some cries of seagulls. Four tracks are featured on this self-titled debut EP by French based HOULE, rough and impetuous like the turbulent sea, to stay in the picture. Looking at the photos of the band posing on the beach in bloodied sailor clothes you might think they are straight out of a horror movie like “The Lighthouse” by Robert Eggers. Musically the band can be located in the Black Metal of the early 90s. But not in the tremolo picking thunderstorms or billowing keyboard fogs. Instead the very early CRADLE OF FILTH and DIMMU BORGIR came to my mind. Because of the different types of singing and screaming, female voices and spoken words. And because of a song-writing that emphasizes more on creating a dark, deep and obscure atmosphere without neglecting emotions like hate and aggressiveness. The riffs are both melodic and raw and the sound is also anything but polished, giving this EP some kind of demo tape atmosphere. At one point, however, HOULE overdid themselves, and that is with the song ‘La Dernière Traversée’, which is simply too long respectively the atmospheric parts at the beginning and end are simply too boring. But that is the only criticism I have of this splendid debut. For more information please visit www.facebook.com/houleofficiel or www.facebook.com/ladloproductions