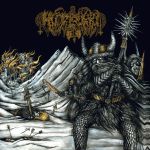 I like chaotic Metal in all forms. Bands embracing such a form usually tend to have a unique take on the genre, sound and the approach. HUORIPUKKI aims to be in the bracket and delivers a sonic bomb worthy to be considered. The Finnish band based in Nokia, Finland has been around since 2008 and “Ikuinen Kamppailu” is their first full length. From a style perspective, they’re a chaotic, rancid Black / Death Metal with the sound reminiscent of East Asia, particularly Thailand bands who’ve explored this space and elevated it to an art form. I’m thinking of ZYGOATSIS, their album “S.K.U.D” in particular. I’d also mention SURRENDER OF DIVINITY who employ a straightforward Black Metal approach but their raw aggressive attack is akin to what HUORIPUKKI employs. The sound is dirty, production-agnostic, in-your-face raw Black / Death Metal which belongs in the depths of a modern city’s forgotten sewerage. The drummer stands out in the mix, employing a simple yet spine cracking melodic approach, Track # 3 ‘Kutsu Pimeydestä’ being a prime example. The band is just going off the plateau with their dark, hypnotic rhythm while the drummer sits gently in the background lashing out on the skins without repentance. Suddenly kick in the MORBID ANGEL’esque solos that let you jump off into their well of sonic aberration. This album is well done, almost all songs start off with a nice gentle passage easing you into the upcoming storm and they make good on the promise too. This is a through and through live band, the album might not do the justification but I’m positive they’ll be a force to reckon with on the stage. The production meanders around and it does seem like it’s part of the messaging here. On the whole, I like the sound of the band and their aggression, I wish it expanded further into the atmospheric route or some kickass passages in between, that would’ve truly added to the charm here. Otherwise, no complaints per se, it is a decent slab of Metal and at just 32 minutes, it doesn’t tire you out too. Category: soundtrack to fighting the storm! For more information please visit www.facebook.com/huoripukki, www.facebook.com/fallentemple666