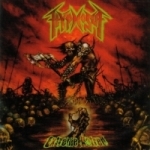 For all those who love to bang their heads without mercy and still worship albums like MERCILESS’ "The Awakening", SADUS’ "Illusions" or KREATOR’s "Pleasure To Kill", there finally is a band again which will take you back to those wonderful days! Really, it’s been a very long time since I have heard such an intense thrashing album! From the beginning till the end, HYPNOSIA thrashes through this album in such a high speed, you have to hear it to believe it! The vocals (damn close to the vocals of SADUS), the artwork (a reaper), the production, even the song-titles, everything on this album is pure Thrash-nostalgia which takes you back to the mid-eighties! Despite the fact that the songs are damn fast, everything is very tight played. As a special bonus, the digi-pack version also features the "Violent Intensity" mini-album and a very well executed version of POSSESSED’s ‘My Belief’. If you call yourself a Thrash Metal fan, this one is simply a MUST!!!! One of my fave releases within the last months!