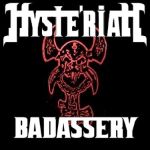 HYSTE’RIAH were a Thrash Metal band from Sweden whose name may be familiar to old timers who used to buy fanzines. After a couple of demos in the late eighties, in came drummer Tom Hallbäck of GOD B. C., itself a band with a name in the underground (back then released by Wild Rags Records). He joined Jerry “Krown” Kronqvist and Cliff T, this new merging assuming the name HYSTE’RIAH G. B. C., and going on to release two further demos and a very energetic full-length Crossover album. After that, the band folded and that was it. Much later, in 2016, a 12″ vinyl was released compiling both HYSTE’RIAH demos, and now it seems that the beast isn’t quite so dead after all: “Krown” decided to bring it back to life and so here we have this new independently released album. “Badassery” is considered a full-length, even though it scarcely goes beyond 15 minutes. It’s not in fact a first (HIRAX, anyone?) and indeed, this music is so intense it kind of feels like a longer record. It features ten tracks that actually depart a bit from the fast thrashing Metal / Crossover of yesteryears, although it’s still pretty much Metal mixed with Punk. The sound quality is violent, with the vocals somewhat behind in the mix, a certainly programmed but brutal drumming, and a bass-rich, heavy sound. Yet the very harsh vocals are more akin to old Death Metal, and only one track (‘Soon You Will Be Dead’) is over two minutes long – and it is the ballad of the album, ah ah! You even have some leads and solos, but the overall feel is underground, oldschool and primitive. It is rough around the edges, but that’s how this music is supposed to sound anyway. Learn more about this musical aggression at: https://en.wikipedia.org/wiki/hyste’riah, https://4stringskill.se