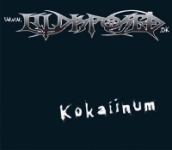 “Kokaiinum” is already the sixth release by Danish ILLDISPOSED (including one mini CD), but except for last year’s cool cover album “Retro”, I never really got into their own material too much. One of the main reasons probably could be the vocals, which are nowadays neither completely in the deep grunting Death Metal style (even though they use those as well), nor in the aggressive old school Thrash vein. It’s mostly some type of raw growling which I just don’t like at all. Just like many other Danish acts as well also ILLDISPOSED come up with a very powerful production (courtesy of Borsing Recordings) and the band quite obviously consists of a bunch of very skilled musicians, but for my taste they simply use way too much of these modern groove rhythms. Plus they obviously neither take themselves nor this musical genre they’re connected to really serious, which I probably hate the most about ’em. It seems as if they’re constantly making fun of the music they’re playing themselves and that’s definitely not the right attitude in the long run! Just listen to ‘Forever Young 2001’ with its weird vocal effects or ‘Intellargent’ , which features a SLAYER rip off middle section and silly dog barking instead of real vocals. But the most trendy sounding is probably ‘A Girl And Her Boss’ which turned me off completely. No, sorry – with this release I still won’t become an ILLDISPOSED supporter either. I better leave that to their one and only die hard fan Dirk Kramer, which they even dedicated the record to.