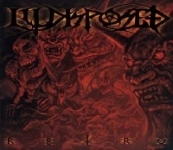 I never really cared for ILLDISPOSED’s previous releases, even though I gotta admit that the guys have my fullest respect for their uncompromising attitude ever since the release of their debut album “Four Depressive Seasons” back in 1992. This new album here ain’t really a new ILLDISPOSED offering in the true sense of the word as it simply features a collection of covertunes (which is actually a very trendy kinda thing these days…), but the five Danish lads at least prove that they have a really good taste in music. To give you an idea what they actually have chosen, let me simply give you a little rundown on the tracklist here: ‘Cromlech’ (DARKTHRONE), ‘None Shall Defy’ (INFERNÄL MÄJESTY), ‘Reek Of Putrefaction’ (CARCASS), ‘Nightmare’ (VENOM), ‘Rapture’ (PARADISE LOST), ‘Open Casket’ (DEATH), ‘Out Of The Body’ (PESTILENCE), ‘Gasping For Air’ (AUTOPSY), ‘Killed By Death’ (MOTÖRHEAD), ‘Intoxicated’ (OBITUARY) and ‘Beating Around The Bush’ (AC/DC). Sounds cool, huh? And the results are also quite entertaining. A good production and solid musicianship compliment most of their versions while the typical unnatural vocal delivery of ILLDISPOSED’s frontman Bo Summer not necessarily fit to all these tunes. In other words, the more extreme the original already used to be, the more convincing turned out ILLDISPOSED’s version. And for that reason ‘Killed By Death’, ‘Nightmare’ and ‘Beating Around The Bush’ are my least favorites on here. But all in all this is still a quite entertaining offering which turned out way better than similar ones of other bands (no names mentioned here…).